Pemco Inc. was founded in 1942 by William Koteles.  Mr. Koteles achieved success by many years of working for pennies an hour, self-education and attending night school in business administration and accounting.  While working as an apprentice at National Acme and NASA, he saw a need for small companies to contribute to the economy of the country.  Prior to WWII, he was motivated to form his own corporation that would handle tooling, special instrumentation and government contracts.  Specializing in different unique types of work gave Pemco the opportunity to become involved in many projects for NASA, such as building ion engines and eventually medical products. 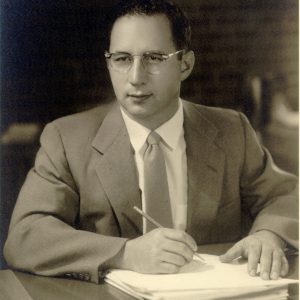 In 1946, Mr. Koteles found himself in charge of a growing company facing a need for expansion.  Under his leadership, the company was incorporated in December 1946.  (Pemco is an acronym for Precision Engineering and Manufacturing Corporation).  With strong leadership from the beginning and skilled personnel, Pemco became profitable from the onset.  From the small backyard garage on East 131 Street with three employees in 1942, the company moved to larger quarters at 5713 Euclid Avenue, and in 1946 the company had outgrown that space and moved to 4500 Euclid Avenue.  Pemco was now manufacturing tools, jigs, fixtures, special machinery as well as air and hydraulic cylinders.  During 1950, Pemco contributed to the defense program by manufacturing tank parts for the Cleveland Tank Plant and aircraft parts for North American Aviation, Inc.

In 1951, Bill decided that it was time for Pemco to enter the research field and an instrument section was added which pioneered in the fabrication of thermocouples and pressure and temperature measuring instruments for aircraft research.  The following year, Pemco was making plans for another expansion as a Certificate of Necessity had been awarded to the company by the government for necessary aircrafts parts, tools, and research instruments.  With a small budget and the future changeable, it was decided to move Pemco into their own plant.  New machines were built for the brush manufacturing industry and Pemco entered a new field…surgical research. 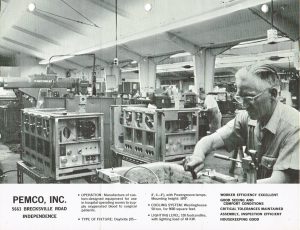 Bill’s most remarkable opportunity came in the early 1950’s when a Kiwanis group was touring the plant as Pemco entered a new field, surgical research.  Among the quests was a surgeon who became so impressed with the precision manufacturing that he asked if Pemco would design and build a special piece of equipment for St. Vincent’s and St, Luke’s in Cleveland.  Bill said that Pemco would be glad to see what they could develop.  This meeting led to Pemco’s association with Dr. Earle Kay and Dr. Frederick Cross and Dr. Dick Jones, who were all working in the medical research laboratories trying to develop a unit that would pump blood through the body with no air bubbles.  The crude equipment which had allowed doctors to do heart repairs would give the patient a healthy working heart but in most cases the patient would have little no brain function left. 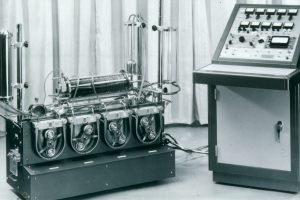 The Pemco device developed is appropriately known as the Kay-Cross Rotary Disc Reservoir-Oxygenator and the basic principal of the machine is the exposure of a film of blood to oxygen atmosphere on a series of rotating discs, mounted within a horizontal glass cylinder up to 21 inches long, with no foaming or bubbling of the blood.  A separate control maintains the blood at a predetermined temperature.  The machines permit a deft to lay open the heart of a patient on the operating table for repair of the damages parts while the machine takes over the function of maintaining the flow of blood through the body and supplying it with life-giving oxygen.  Koteles was quick to say that of all the things his company had done, this was the most satisfying accomplishment.    In 1956, the first life-saving operation using the Kay-Cross Oxygenator was done at St. Vincent’s on a six-year-old girl given anywhere from 2 weeks to two years to live without the heart surgery.

If interested, click on the link to read the original medical scientific publication about this incredible advancement.

Pemco played an important role in the community when Cleveland became known as the Heart Center of the World in 1958.  Pemco built many of these machines which were essential for rare heart surgeries.  Soon after surgical heart specialists find a need for a heart pump. Under the direction of Vice President, John Blazek, Pemco engineered a precision rotary pump to be used with the Kay-Cross Oxygenator.  This remarkable mechanical devise takes over the function of the heart and lungs respectively, during open heart operations.  During this year, other surgery apparatus and medical equipment have been developed by Pemco.  Requests are received from Iron Curtain countries and Pemco prepares to export to Hungary, Poland, and Romania.

In the 1960s, Pemco pioneered in the manufacture of heart valves. 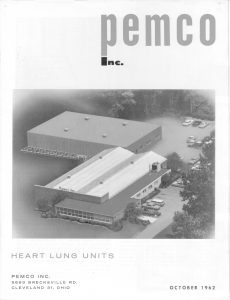 Various types that were made included the Magovern-Cromis Sutureless Prosthetic Heart Valves, the Cartwright-Palich Presthetic Ball Valves, the Cross/.Jones Lenticular Prosthetic Valves, the Ionescu-Ross-Wooler Fascia Lata Graft, the Ionescu-Wooler-Pemco Heterograft Valve Support and several types of valves for animal research.   Mr. Peter Marino oversaw developing and producing electronic medical equipment.  Jobbing shop work continued and tooling for 1960 automobiles gets underway. Production of parts for the industrial brush manufacturing was also in process.  Sales for 1959 are estimated to be near the million-dollar mark.

1960 to 1970 Pemco contributed much to the NASA Space Programs, the Moon project, The Mars project, and the Jupiter project.  By this time Pemco had manufactured over 1,000 Heart-Lung Machines, all of them customized to the hospital and doctors’ specifications.  With the introduction of disposable equipment beginning in the early 70s, the Pemco units were still in much demand as the medical equipment was easily adaptable to the disposables.

In addition to manufacturing Heart Lung Units, Pemco was working with BF Goodrich Research, General Electric, Ford Motor Company, Packard Electric and Trane Company. Pemco looked forward to becoming further involved with surgical research projects, dealing with Bio Medical Engineers, Perfusionists and Doctors.  With the tremendous expansion program at Cleveland Clinic, Pemco worked with them and helped them achieve their goal of making Cleveland the medical and surgical center of the world. 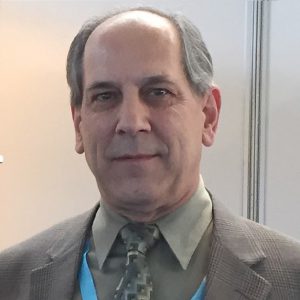 The operation of Pemco has since transitioned to Bill’s son, William John, who continues to expand the scope of Pemco’s engineering and tooling capabilities both inside and outside of the surgical arena.  Pemco continues to play an important role in cardio thoracic surgeries, manufacturing stainless steel reusable medical equipment necessary for these delicate operations.  There is no way to count the number of lives that have been saved and extended, thanks to the precision machinery developed by Pemco, its’ employees and founder, William Koteles.

Throwback Thursday in the office

Cleaning out some files and found this magazine from 1957. Apparantly, there is a cure for the Asian flu from the past that might be worth investigating. Proof that history repeats?

A few Thursdays ago, we posted our old trade show display. Look what we found in one of the offices!

A Little Trip To The Pemco Shop

Pemco Incorporated was founded in 1946 and the current machine shop has been in operation since 1953. High quality craftsmanship with only the best equipment was the building block for Pemco’s established excellence in manufacturing. In 1953, Pemco invested in top notch quality equipment, some of which are still in use today. Here are a […]